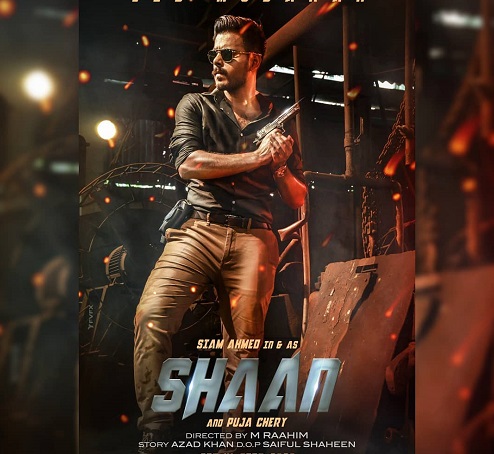 In this year mid time has been started Shaan bangla movie. Shaan is the third bangla movie of Siam Ahmed and Puja Cherry. Theirs first movie was Poramon 2. And theirs 2nd movie was Dahan directed by Raihan Rafi.

At a glance of Bangla Movie Shaan 2019

Shooting of the second lot of ‘Shaan’ movie started at Zinda Park in Narayanganj. There will be shoots for some days, then it will be filmed in different places of Dhaka.

The camera was opened before the Eid on Sunday (May 26th) in the city’s Uttara. A day before Eid, the first lot was shot. The film is directed by M Rahim, who previously worked as Assistant Director of ‘Poramon 2’ and ‘Dahan’.

Dear visitors we are try to update news published here. If you wants to get regularly entertainment news such as Movie, Natok or Drama, movie trailer, movie reviews, movie release date, song release and all entertainment news etc. So lets to enjoy by update media news must be stay with us. So if the site likes then share to others. And best of luck upcoming Bangla Movie Shaan 2019.