Bangla Movie Agun 2019. New upcoming Agun movie directed by Bodiul Alam Khokon. By this movie Bangla movie lovers gets a new paired up movie. It’s an romantic and action thriller movie. The movie will be released on this year. 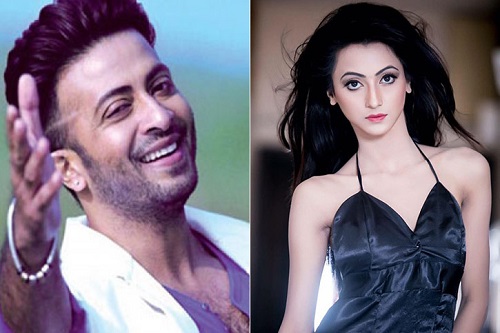 Newcomer Zahra Mitu will play a duet with Shakib Khan in the film ‘Agun’. Shooting for this film directed by Badiul Alam Khokan will start later this month. The director of the film said yesterday that he had signed a contract with Mittu as the heroine of the film. Earlier, the name of the film was ‘Fighter’.

At a glance Bangla Movie Agun 2019

In this regard, Khokon told NTV Online, “We will start shooting the movie ‘Agun’ in the last week of this month. Newcomer Jahara Mitu is the heroine in the film. Yesterday, there was agreement with Mithu. ”

Khokon added, “We are dealing with a new heroine in need of a story. Shakib Khan is currently shooting for a photo of Zakir Hossain Raju. After that there is some shooting left in Shapala Media, it will work. Hopefully we can start shooting this film later this month. ‘

Prior to the film, Mitu has made multiple music videos, short films, plays and presentations. Shakib Khan, Amin Khan and Mousumi are also starring in the film besides Mitu.

Shakib Khan recently announced the creation of a film titled ‘Fighter’ at FDC’s Zahir Raihan Kalar Lab. In addition to ‘Fighter’, the names of the three pictures were announced. These are Kazi Hayat’s ‘hero’, Malek Afsari’s ‘Password-2’ and Himel Ashraf’s ‘Priyatma’. The name ‘Fighter’ was renamed ‘Fire’.

Eid was released on Shakib Khan’s movie ‘Password’. Shakib Khan produced the film again after a long five years through this film. The film is directed by Malek Afsari. Shabnam Bubal starred in the film titled ‘Password’. Prior to this, he was the first producer of ‘Hero the Superstar’, produced by Badiul Alam Khokon. Shakib’s ex-wife Apu Biswas played the heroine in the film.

Dear visitors we are try to update news published here. If you wants to get regularly entertainment news such as Movie, Natok or Drama, movie trailer, movie reviews, movie release date, song release and all entertainment news etc. So lets to enjoy by update media news must be stay with us. So if the site likes then share to others. And best of luck upcoming Bangla Movie Agun  2019.