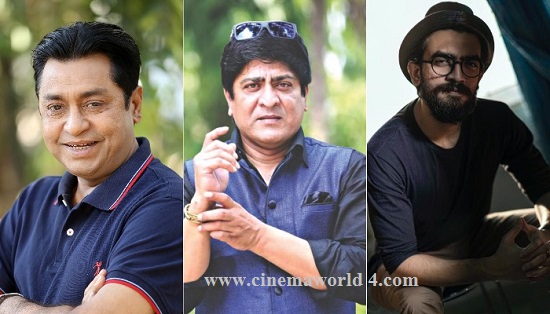 Three stars have joined the acting world this time in the movie ‘Once Upon a Time in Dhaka’ (Akbar), directed by one of the busiest filmmakers of the time. They are Shahiduzzaman Selim, Amit Hassan and young actor Tanvir who stepped into the film through ‘Gehin Balochar’.

At a glance of Akbar Bangla Movie 2020

The creator said the characters in the film are all important. Among them are Shahiduzzaman Selim, Amit Hassan and Tanvir.

The shooting began on January 16 with the caption of the film’s title song. The shooter is about to start shooting again from the first week of February, said creator Saikat Nasir. With the new photo, Shahiduzzaman Selim said he was contracted on January 27. He said, gang, suspended in suspense.

Another actor Amit Hassan said, “I was contracted on January 22. The latest builder of the beach Nasir. I saw his ‘Desha the Leader’. She always tries to make her own style. I don’t want to say anything about my character. But there is going to be something bigger. From February 15th, I will be shooting for ‘Akbar’.

Abu Huraira Tanvir is going to work on the big screen again after a heavy shelf. He said, “Once upon a time in Dhaka”, my second film. The film is mainly about gang culture. The hero here is the crime and the villain is the administration! I’m going to be appearing with a brand new character. I have ample opportunity to break and prove myself. So I’m trying to be ready in the meantime.

National Film Award-maker Saikat Nasir said, “Once Upon a Time in Dhaka” every character has the opportunity to perform. Every character is strong. This will be the film based on the acting cast. He said that after shooting the song, I did a lot of new studies on story and screenplay. Because, if these two things are good, then it is possible for the movie to hold the viewer.

The story of ‘Once Upon a Time in Dhaka’ will be seen in the gang culture of the capital after 1974. Where the rise of Dhaka is declining. Abdullah Zahir Babur and Asad Zaman wrote the film’s screenplay and dialogue in the story of Ranak Ikram. The creator said some more artists will be joining the film. It will be reported before the shooting.